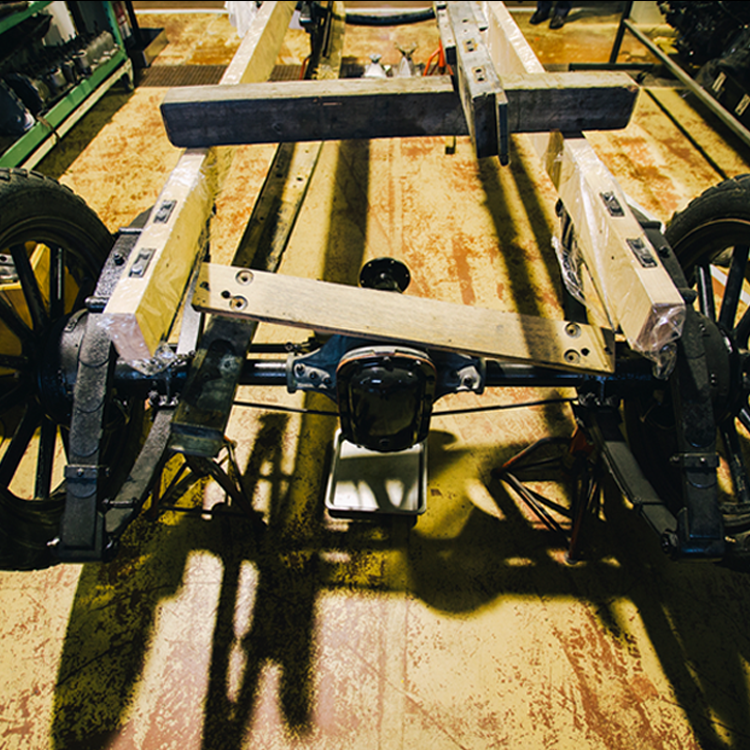 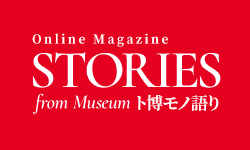 From T-TIME Exhibition Archives : Toyota Automobile Museum "Behind the Scenes" Exhibition (No.93 Autumn 2014) 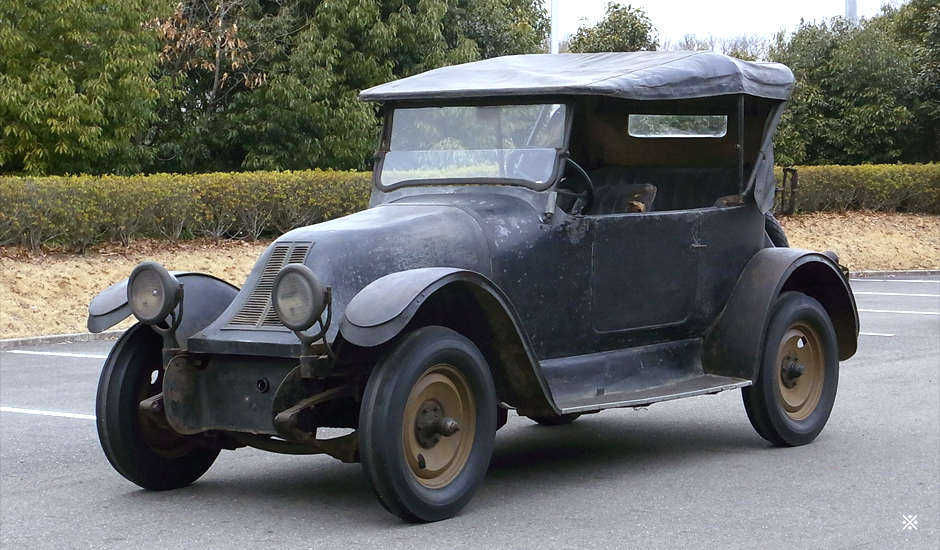 One of the hallmarks of the Franklin car born in the United States was its introduction of cutting-edge technology into even its finest details. At the beginning of the 20th century, the United States was crowded with about 130 automobile companies. In order to differentiate itself from other companies, Franklin sought to design lightweight, highly original vehicles. This car had a 6-cylinder air-cooled engine, a wooden frame, and a body made primarily from aluminum. Despite its technical mastery, Franklin went bankrupt as it failed to gather the support of consumers. For a short period of only 30 years, the passion of Franklin was packed into its elegant body of cars. 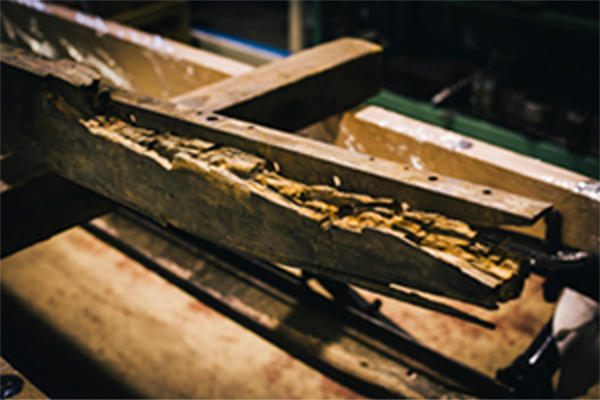 The original wooden frame made 96 years ago. The traces of a famous car whose visage reminds us of the passage of time. Isn’t it surprising that car chassis used to be made from wood?

We needed to reproduce everything in the car, right down to its last screw. In cases where its original parts could no longer be used, new parts had to be made. Project Name: Franklin Restoration. The burden of responsibility weighed heavily on our shoulders.

Around seven years ago, extensive restoration works began for this Franklin, which was manufactured in 1918 and donated to Toyota Automobile Museum from Waseda University. Franklin was selected for this massive project whose scale the museum had not witnessed for around a decade because of Franklin’s passion for its technology. To recreate this car, a level of passion equal to the scale of the task was essential.

The case in point is its new wooden frame, which had to be manufactured for the first time in 96 years. The frame’s original manufacturing method required a production period of 18 months, including immersing it in oil for 2 months. The white ash used in the original frame cannot be obtained in Japan today. After searching for materials as similar to the original as possible, we decided to use tamo, the same genus as white ash, as our material. The most challenging part of this was calculating the margin required. Supporting a combined weight of 300kg from the car engine and body will cause the wood to warp by almost 8cm. The choice of wood had to be made based on calculations of this “warping” effect. This meant that precision and meticulous attention to detail were essential attributes at every step of the process, just like with carpenters who build temples and shrines. 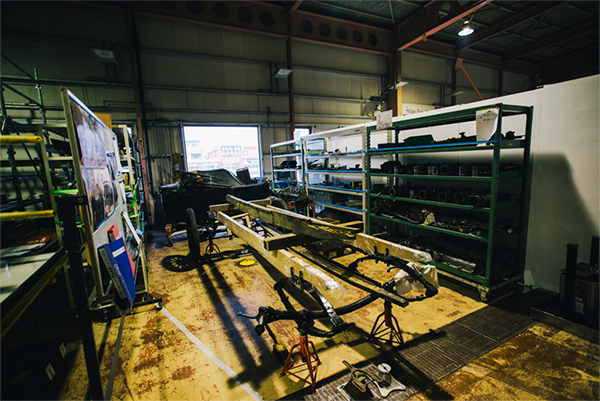 The wheels were removed from the car during the production of the new frame, leaving behind a form that was so simple that this hardly looked like a “car restoration” project. This is because cars are simple machines by nature. 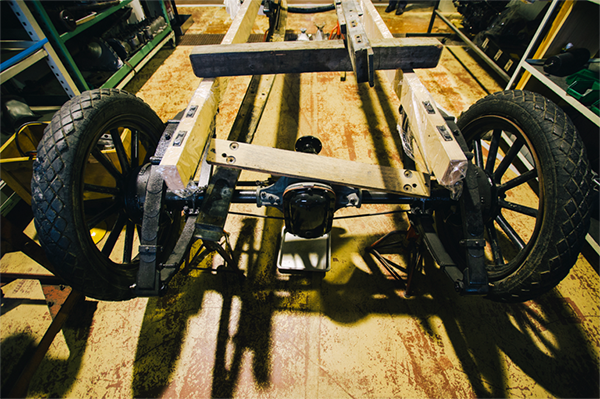 The closer you look at the details of the frame, such as its joints, the more you appreciate its exquisite design. Even the new chassis exudes an imposing aura as an object.

Under ordinary circumstances, it would not be possible for a car under restoration to be seen by the public. This “Behind the Scenes” exhibition was set up in a style where visitors were allowed to see a number of disassembled parts and even the parts shelves of the workshop performing the restoration work in practice. This exhibition was significant in that it offered glimpses into what lies “behind the scenes” with regard to restoration work. As for the method of restoration, this restoration project was carried out with the use of cutting-edge, 21st century technology. Non-contact digital 3D scanning technology was harnessed to reproduce the seats on display. With the exception of the surface layer of leather which had undergone severe deterioration, the original materials were reused. Analyzed by high technology, reproduced by craftsmen. Many techniques of the past had already been lost, but how did we compensate for these using modern technology? It was possible to catch a glimpse of this internal struggle. Another problem in the modern era is that craftsmen who possess restoration skills are growing older. The “Behind the Scenes” exhibition not only told stories from the past, but also aimed to draw attention to new challenges.

Curator Kawashima, who was in charge of the Franklin restoration project

Shaping the future with Franklin’s obsessive passion, which extended to the car’s finest details.

Restoration at Toyota Automobile Museum is not only about making cars run again or neither about recreating a beautiful exterior for them, but also we restore the vehicle to its initial condition when it was released by being as faithful as possible to the technology, manufacturing method, and materials of that period. The value of performing restoration work at Toyota Automobile Museum lies in the results of the restoration itself. “Understanding the passions of the past can guide us into the future,” says Takahiko Sugiura, the curator-in-charge. He added that perhaps there is value in showing the world not just successful stories, but also cases such as that of Franklin, which went bankrupt as a result of imbuing its cars with too much passion. This massive relic of the past on display at Toyota Automobile Museum fuses the passion of people who had lived 100 years ago with the craftsmen of modern times, and will play a major role in shaping the future. 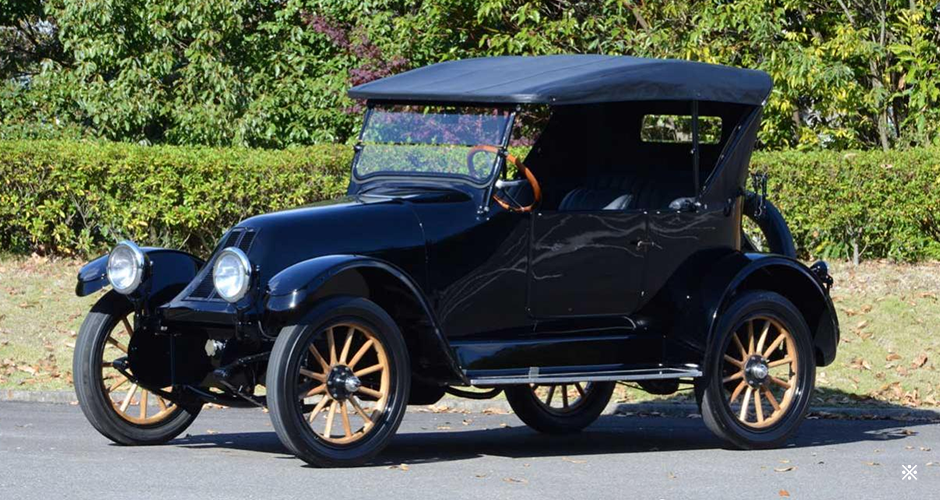